Biker Down is a national campaign which raises awareness of biker safety and first aid within the motorcycling community. The initiative, which was started by Kent Fire and Rescue Service’s Fire Bike Team is now represented throughout the UK. Offering free first aid courses, this invaluable training helps motorcyclists cope in the event of an accident. The idea being, the more motorcyclists that know these first aid techniques, the safer the community will be together on the road.

Fleet ID have been proudly supporting the Biker Down campaign for a number of years by providing Fire Services with branded motorbike livery. We have just completed another bike wrap for Derbyshire Fire and Rescue – this one with a slight difference!

We have worked with Matt Bill, Crew Manager of Road and Water Safety at Derbyshire Fire and Rescue, on a number of Biker Down motorcycle liveries. One livery was for a BMW R Nine T Cafe Racer and the other for a BMW 9RT Urban, each promoting the important message of the Biker Down and Upright Motorcycle Road Safety Campaigns.

So, we were delighted when Matt came back to us with another project – this time for a Zero DS 2020 electric motorbike. With more and more requests for electric vehicle livery coming our way, we were excited to receive one about an electric motorcycle! The bike required a full wrap with reflective flashes and would be the first electric bike to be used in The Fire Services Sector, as part of the national Biker Down campaign.

As with previous projects, we provided a full templating and design service. Creating a full template would allow us to ensure the best possible fit for the graphics. We wanted to make maximum use of the available area on the bike, taking into consideration the contours and recesses in the bodywork. Along with the Biker Down logo, the branding for the Upright campaign was also included. This is a joint venture between Derbyshire Constabulary and Derbyshire Fire and Rescue Service which further promotes the message of biker safety on Derbyshire’s roads. There would also be Pidcock Motorcycles logo, who show their support for the campaigns by donating the vehicles to the Fire Service.

The shape of the bodywork was something we considered very carefully when choosing the print media for this bike. As with most motorcycles, there were many intricate shapes and recesses to navigate. We needed to make sure that the printable wrap media could cope with these – and we knew one that would be just the job! The bike wrap was printed onto Avery MPI1105 EARS and laminated with Avery DOL 1460z to ensure fully warranted coverage on the recesses on the motorbike. 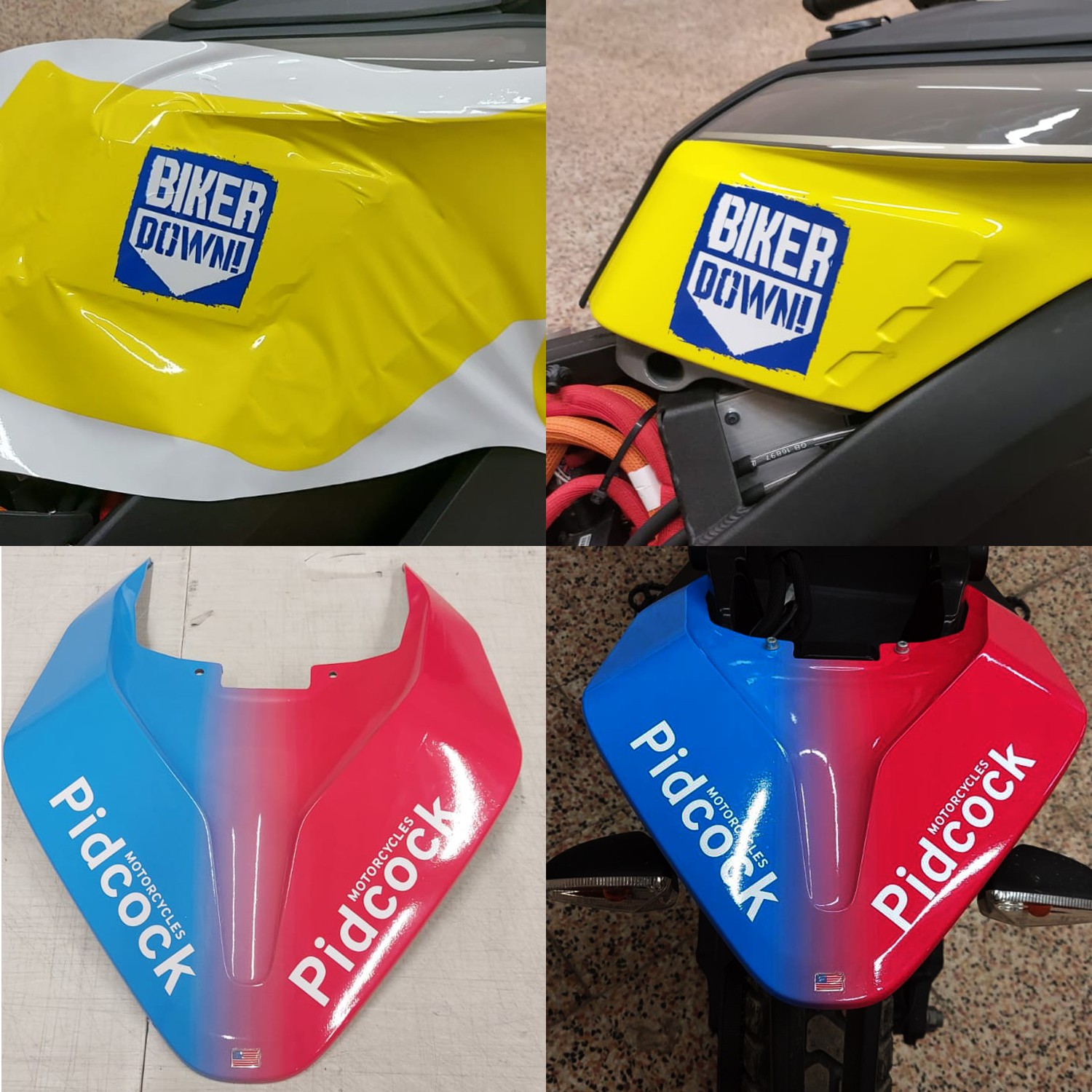 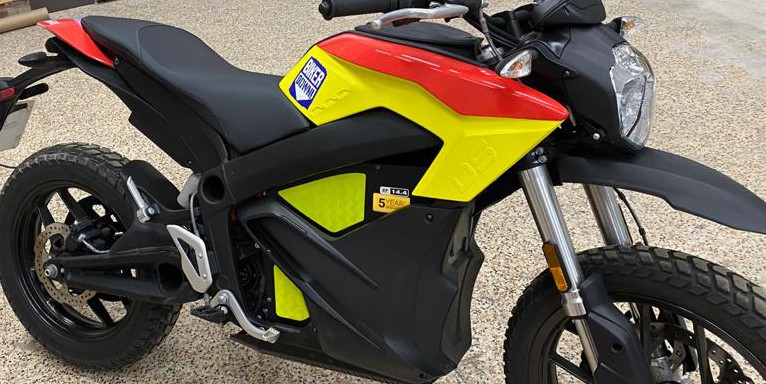 From the point of receiving the initial enquiry from Matt, the project took us just 3 weeks to deliver. Matt picked up the motorbike and it wasn’t long before it was getting some attention!

“A massive thanks for another quality job by yourselves. It is already getting attention. This is the first Electric Motorcycle in use across the 48 different Fire services in the UK which deliver Biker Down.

It has been such a successful Road Safety campaign that it is now being delivered in North America.

Once again many thanks and look forward to using your company in the future.” 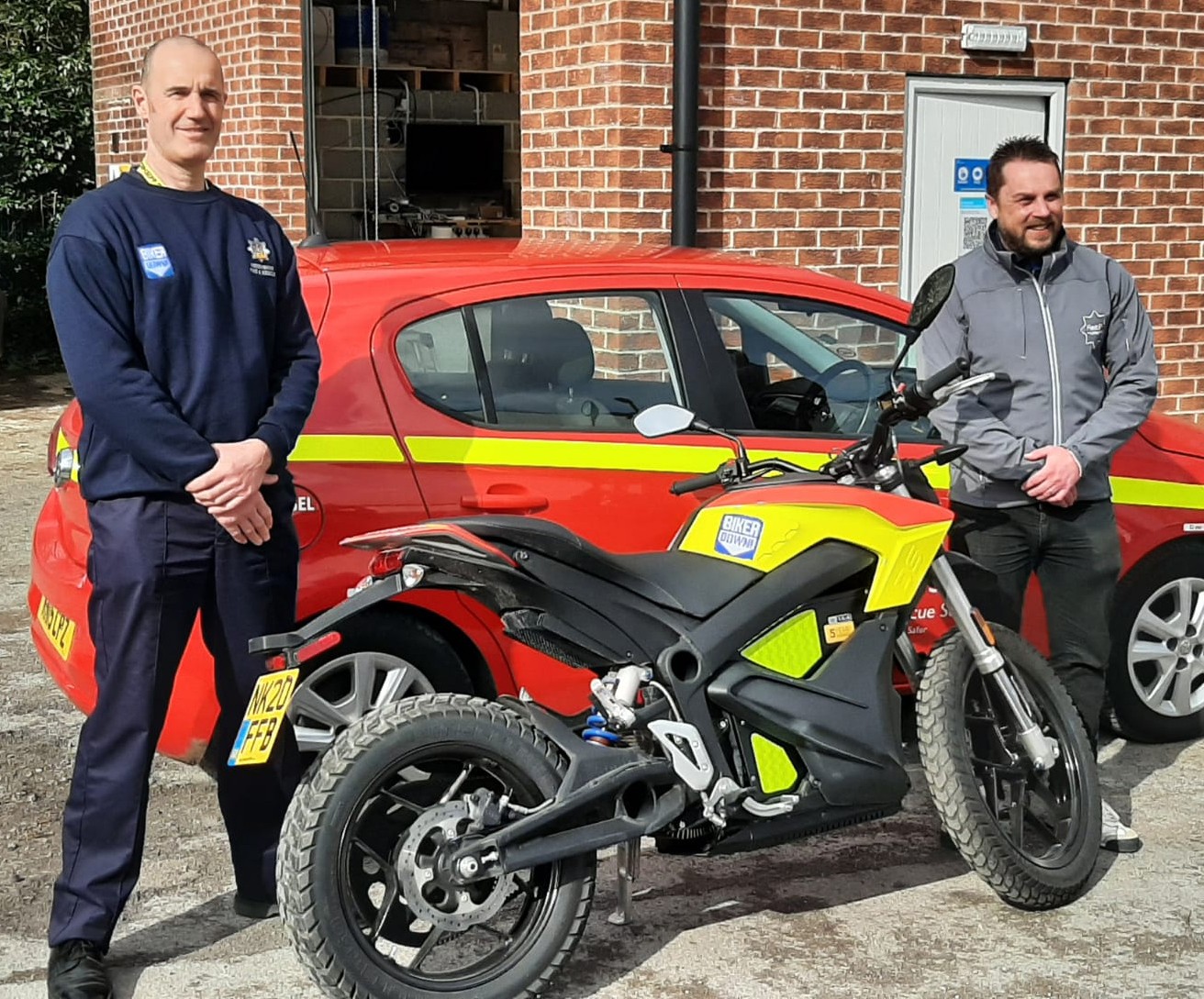 We were delighted that Matt and the team at Derbyshire Fire and Rescue were so pleased with their new electric motorcycle livery. We hope that it helps to spread the word of the important job being done by the Fire Services and Constabularies in relation to biker safety. We look forward to more projects with Derbyshire Fire and Rescue in the future.

Biker Down courses consist of a 3 hour presentation covering accident scene management, first aid and the science of being seen. At the end of the course the candidates receive a free Biker first Aid kit, a certificate and Biker Down badge. To find out more about the Biker Down campaign, visit their facebook page here or email BikerDown@derbys-fire.gov.uk for further information.

Many thanks to Pidcock Motorcycles for their continued support in this campaign. www.pidcock.com.

View all
Emergency Service Stories
19 May 2021

Ready to get your fleet covered?