Derbyshire Constabulary have been busy with Operation Sceptre this week – a national week of focus on the fight against knife crime. Engaging Derbyshire residents is key to the success of this type of project. Their new Police van – wrapped by Fleet ID Limited – is out on the roads helping them spread the word.

The Police van started life as a plain white Ford Transit Custom. The livery would be loosely based on the Derbyshire Fire and Rescue appliance that we completed last year – with the Knife Angel as the focus of the design. The Knife Angel (the National Monument Against Violence and Aggression) made a visit to Derby as part of its national tour in 2019. This visit was instrumental in making the reduction of knife crime a focus for the city. The Police van also needed fluorescent and reflective markings and include the campaign strap-line ‘Drop the knife. Save a life’.

Designs were submitted to Derbyshire Constabulary and once approved, production of the printed livery, as well as the fluorescent and reflective elements, began. 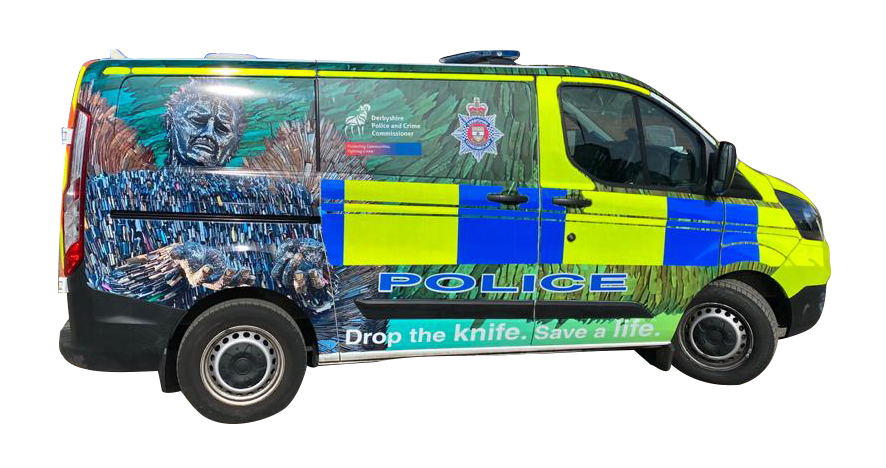 The powerful image of the Knife Angel was used to wrap both sides of the vehicle. The colours in this print were tweaked to incorporate blues and aqua colours, to tie in with the colours of the Police force. The print also included the Derbyshire Constabulary and Derbyshire Police and Crime Commissioner logos, placed on the flat panel sections. Battenburg safety markings were applied over the top of the full wrap and the ‘Drop the knife. Save a life’ campaign slogan was included too. 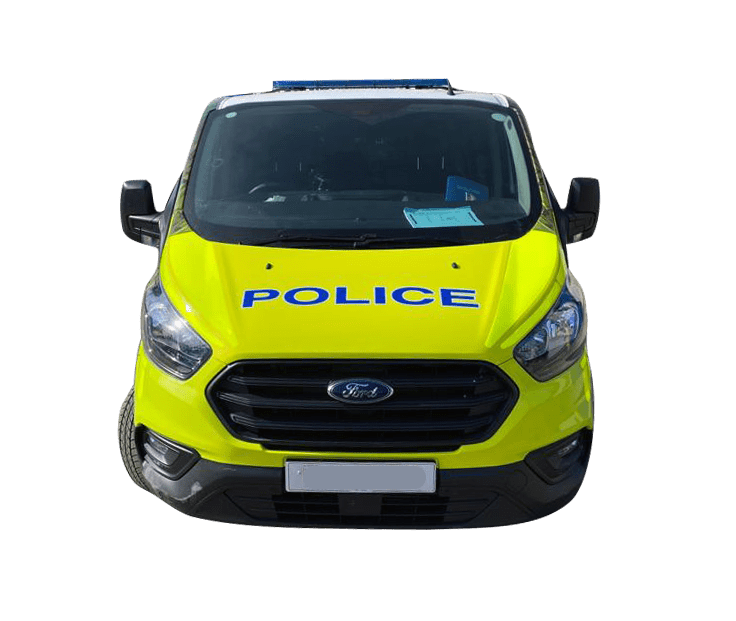 The bonnet was wrapped in fluorescent yellow vinyl and Police text was added. 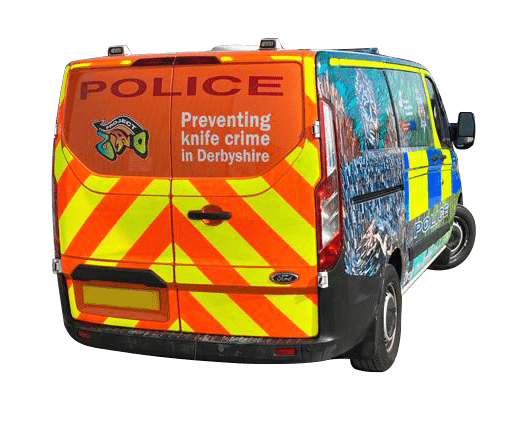 The rear was wrapped in printed vinyl. The orange colour was carefully selected to be closer to Police livery colours and a rear chevron kit was applied too. The Project Zao logo was also focal point of the rear livery. Project Zao is the title of Derbyshire Constabulary’s year round action against knife crime in Derbyshire.

All wrapping and application was carried out at our on-site vehicle livery fitting facility. The Police van was then ready for pick up on Monday 26th April.

The Police vehicle was put straight to work…

T­he van will be used throughout Derby, visiting scenes significant to previous crimes involving knives. This will also allow an opportunity for people to surrender unwanted knives and sharp weapons.

Seen here at Peartree Police Station, the van is used to mark the Constabulary’s involvement in Operation Sceptre. This campaign is a national week of intensification in the fight against knife crime. 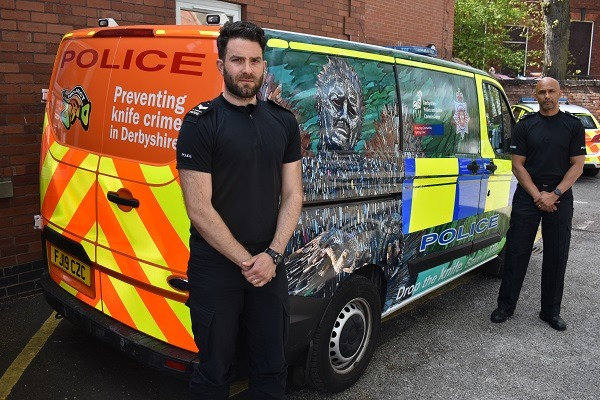 Inspector Keith Chambers (Pictured on the right here with Sgt Ben Frearson), who is in charge of policing in the west of Derby, explained:

“The images on the van will be seen by many people across the city and so builds upon the partnership work undertaken by the force, Office of Police and Crime Commissioner, Derby City Council and the Diocese of Derby to bring the Knife Angel to Derby.

“Also included are the logos of Project Zao which is the title of our year-round action against knife crime, a reminder that this work goes on throughout the year.”

The following day, the vehicle was used as part of a knife sweep in King George V Playing Fields, Littleover. Here, officers joined forces with Carlisle Against Crime group from the local area, helping to ensure that the park and playing fields remain a safe place for all to enjoy. 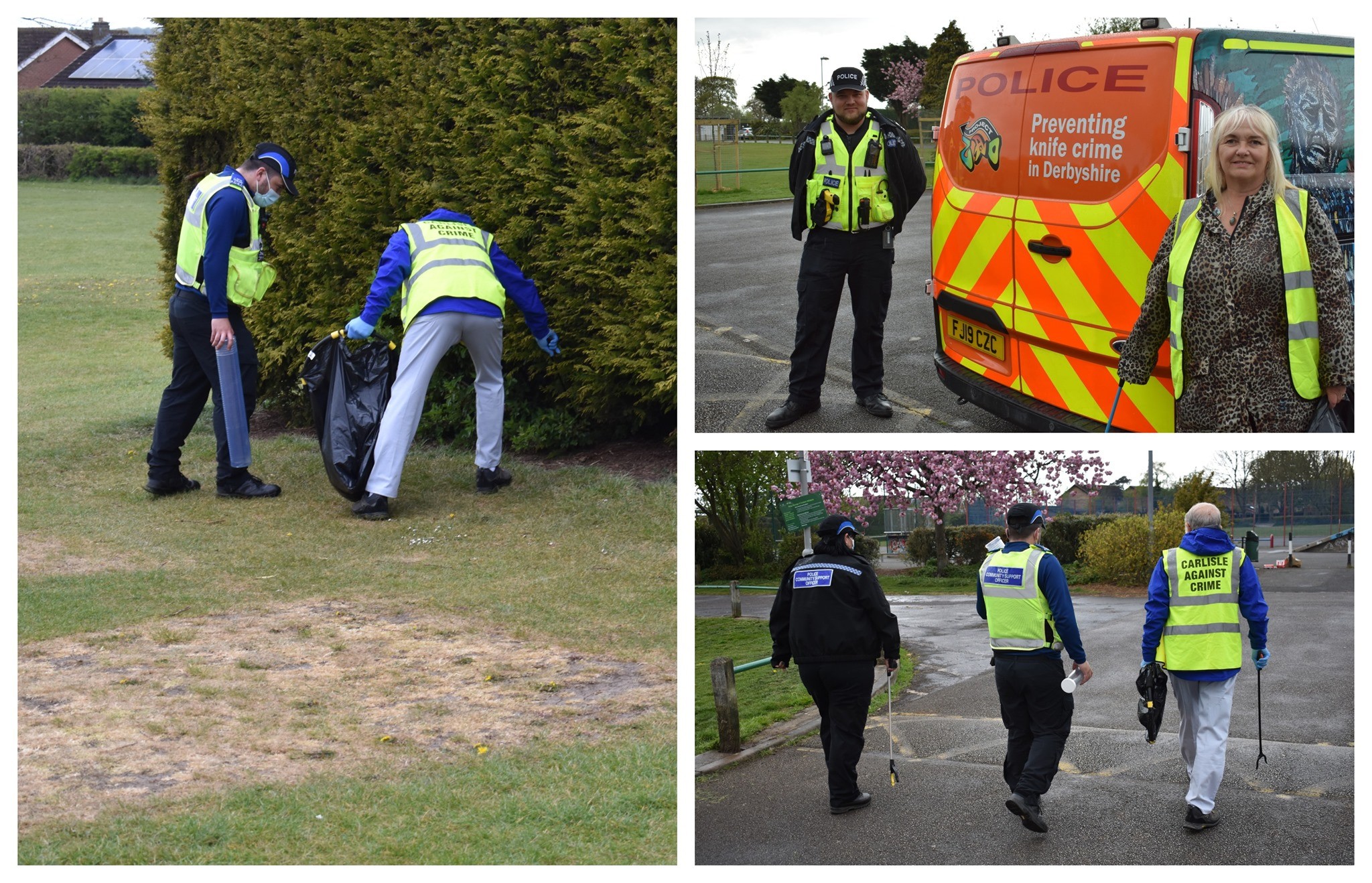 The Police van is helping to make a difference

Operation Sceptre got off to a flying start for Derbyshire Constabulary, reporting that engagement with the campaign is the best they have ever seen. This can only be a good thing for the fight against knife crime and violence. We’re very proud to be part of that effort and wish all involved safe travels in the newly wrapped Police vehicle!

To find out more about Derbyshire Constabulary, Operation Sceptre and the fight against knife crime, head over to their Facebook page here.

What Fleet ID can do for you – video

Ready to get your fleet covered?